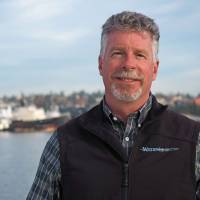 Scott Helker, along with his wife Lisa founded Waterline Boats LLC in 2008 to sell new trawler yachts in the Pacific Northwest. To grow the brokerage side of their business (diversity in the boat business is good!) they soon thereafter joined the Boatshed International Yacht Brokerage Group to gain its many marketing and sales advantages, and have expanded their brokerage operations to multiple locations. They are also the principals of Helmsman Trawlers, building exceptionally high-quality trawler-style yachts in China and importing them to North America.

Scott was raised to be a boater to his core. His father Howard built the family houseboat (a two year project that remains the centerpiece of family memories) and Scott assisted while young, impressionable, and small enough to paint in the far recesses of the bilge. When the boat was launched Scott was assigned as navigator and took his responsibility seriously. The family of six cruised SEASIX throughout Wisconsin, the Bay of Green Bay and Lake Michigan every summer for many years, and Scott and Lisa even honeymooned aboard that boat. Scott and Lisa have never been without boats since, and have cruised the Southeast, Coastal California, the Great Lakes, the Pacific Northwest, and the many lakes of Oklahoma and Missouri. They've enjoyed sailboats and a wide variety of powerboats and now live very contentedly aboard an Ocean Alexander motoryacht homeported on Lake Union, Seattle with no desire to return to a dirt-bound life!

Before owning Waterline Boats and Helmsman Trawlers, Scott managed manufacturing operations for a large consumer products company and served in the US Navy aboard submarines. He likes to run a tight ship and takes pride in the integrity and forthrightness of his businesses. 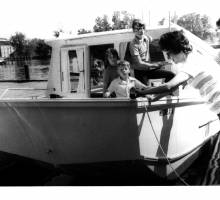 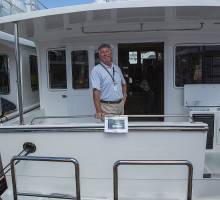 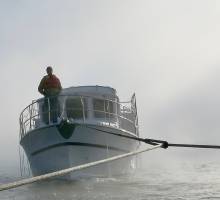 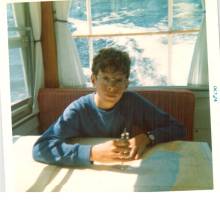