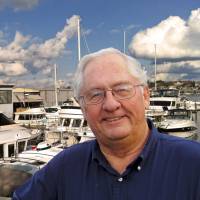 For Roger Drill, the boat business is a life-long calling. His father got into the boating business in Duluth, Minnesota the year Roger was born. Small boats, row boats, and outboards were a daily part of his childhood as he grew up on Lake Superior. He bought his first boat at just 12 years old and by 14 he was hooked on racing sailboats. The passion for racing continued throughout his life.

After many years working with his father, he continued to work and build his reputation as one of the premiere boat dealers of the Midwest. Roger then moved to Colorado to get involved in the mortgage banking business., and raced sailboats both in the lakes of Colorado and in races all over the country. After nine years in Colorado Roger knew that he needed to get back to big water. After spending some exploratory time in sailing around Washington he moved to Seattle.

Once he was in Washington Roger made the shift from selling to building boats – Nordic Tugs and later Pacific Trawlers. Later he moved into selling imported trawlers. Among his first customers for one of these boats were Scott and Lisa Helker who would themselves get involved in the boat sales and importing business as Waterline Boats, and now Roger works for them as a broker.

“I enjoy short sails into the islands around the area. Going to Poulsbo and crabbing. Just going out on Lake Union or Lake Washington and sailing. Being on board. Sometimes just sitting at the dock is good.”

A lifetime in the boat business in service, sales and construction make Roger tremendously knowledgeable. If you want to know the history of the boat business, the mechanics of a sound boat, or if you want to see a good sailboat race on a Tuesday evening, Roger’s the man to see. And if you’re looking to sell or buy a boat Roger can definitely help with that too.