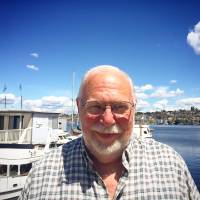 Born in Salem, Oregon, Dave Carleson has loved boats his whole life. Boating was a family thing, making family trips to the coast and renting rowboats on the Siletz River from a very young age. When Dave was older, he purchased a Gary 18 Sailboat, but his first boat was one he and his father built together when he was 4 years old.

“We were on a farm near the Willamette River and as a child we would go to the river for picnics and drag boats on strings, pond boats we had built. So interest in the water just came with being born into this family.”

In the 70s Dave moved to Portland and began his 26-year -long teaching career. At the same time, he developed a fiberglass canoe company that, over time, built more than a thousand canoes. Later, his company built a sailboat, a Bahama 25, which sold commercially in the Bay area California and Seattle.

“I dreamed in those days of being able to not teach school anymore and have a water related business in Seattle.”

In the 80s Dave took a year off from both teaching and the canoe business. He lived aboard a Jason 35 sailboat. Once the year was up he found he didn’t want to go back and in 1989 he co-founded and owned Mahina Yachts on Bainbridge Island. For 25 years he connected buyers and sellers and loved what he did. He and few others were the first small group of Washington brokers to qualify as Certified Professional Yacht Brokers (CPYB).

In 2015 Dave was working on a co-broker deal with Scott and Lisa Helker of Waterline Boats. Dave appreciated their friendliness and professional ethics when it came to the people they worked with and for. Scott and Lisa were also impressed by Dave and offered him a job. Dave started working at Waterline Boats in May 2015.

Today, Dave lives on Bainbridge Island and owns a 38’ Sportfisher. He has cruised around a lot of Puget Sound and loves getting away and exploring.

“You get out to Neah Bay where the ocean meets the straights I would have to say that’s a big favorite of mine. Where big geographical areas converge. All of it is richer. The birds, the seaweed, the climate changes. It’s more wild.”

With so many years as a boater and a broker under his belt, Dave knows that with true boaters it’s about adventure. What boating have you done in the past? What boating adventures would you like to do? If you have an adventure in mind, Dave wants to help you make it happen.